5.27.2018: We have a new version up as a playable demo!  Please see the build notes in the folder for information on controls, known bugs, and other details.

This is my Game Jam submission for the Games Plus Jam!  I started work on Friday at 11 AM and finished Sunday at 10:15 PM.

I wanted to create a much bigger game (I'll bet everyone who does a game jam says that), where each level was affected by time and had puzzle elements that related directly to that time frame.  I didn't have time to make that many levels, so this version is a hyper abbreviated version of that idea.

The player moves through the level trying to get past enemies that were brought here as a result of her witchcraft experiments.  She has to move through the time distortions she created in order to try and fix the mistakes she made.

Ultimately, I think I had the most fun with the main character, Istra.  She was a blast to imagine and design, and working her animations was a lot of fun!

All of the art is mine, except the UI elements.

Please note: My first submission didn't have the Unity player added to it.  This current submission does, so you should be able to play it even without Unity. 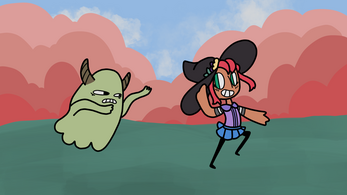